The playing field is divided into red and blue alliance sections, separated by a neutral zone that contains boulders. Each section contains a courtyard, an area for opposing teams to shoot boulders at the castle goals, a “secret passage” that allows human players to feed boulders to their robots from the human player station, the “outer works”, and the tower.

The outer works is the series of five defensive obstacles that divide the neutral zone from the alliance sections and span the field. Four of the five used obstacles are modular and can be moved, and certain obstacles may or may not be present during a match. Options for defensive obstacles include a cheval de frise, a “moat”, ramparts, a drawbridge, a sally port, a portcullis, a rock wall, and “rough terrain”. The defensive obstacle on the left of each outer works, the “low bar”, is not movable. LED light strips at the base of each obstacle display current obstacle strength.

Three defensive obstacles of the outer works in a particular match are determined by the teams playing the match and one obstacle is chosen by the audience.

There are over 18,000 possible field configurations from the eight defensive options.

After problems with robots and boulders getting stuck in the fabric on the low bar, FIRST made the decision to have it replaced with rubber flaps at some events (including the Championship).

The tower consists of five scoring goals, three scaling rungs, and a “batter”. Three high goals are 7 feet 1 inch above the playing field, and two low goals are six inches above the playing field. Three rungs for robots to scale the tower are 6 feet 4 inches from the playing field. Colored LED light strips on the front of the tower display the current tower strength. The “batter” is a series of seven 60° ramps at the base of the tower directly in front of the low goals designed to make challenging and scaling the tower difficult. The tower has a health of 8 for regional and district play and a health of 10 at the FIRST Championship. 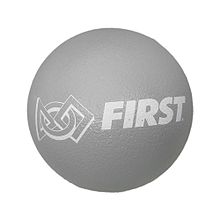 Scoring elements are called boulders, grey foam balls that are 10 inches in diameter. There are 12 boulders present on the field at the beginning of a match and 18 total. Six boulders are staged evenly along the mid line of the field, and three boulders are at each human player station and one in each robot.

Stronghold is a medieval tower defense game in which two alliances of up to three teams each compete to score points by breaching the opponent’s outer works and capturing the opponent’s tower. Before the match, teams and the audience select defenses to fortify the alliance’s outer works. Teams receive two ranking points in the competition standings for a win, and one ranking point for a tie.

Each match begins with a 15-second autonomous period where robots act on pre-programmed instructions. The match then transitions to a 2 minute and 15 second teleoperated (tele-op) period, where robots are driven by the drive teams.

Robots begin in the neutral zone with the ability to hold one boulder each. However, alliances may assign a “spy” robot to start in the opposing alliance’s courtyard. Alliances earn 2 points for reaching the opposing alliance’s outer works, and earn 10 points for crossing them. Any additional defenses a robot crosses in auto will not decrease a defense’s strength, or give points to the alliance. Once across a defense, a robot in autonomous mode can score a high goal for 10 points or low goal for 5 points.

Robots retrieve boulders from either their secret passage or the mid line, overcome opponent defenses, and score goals in their opponent’s courtyard. Robots may transport only one boulder at a time. Each time a robot crosses an undamaged defense, they receive 5 points. Robots earn 5 points for scoring a high goal, and 2 points for a low goal. In the last 20 seconds of the match, robots race to the opposing alliance’s tower to either park on the batter, earning them 5 points for a challenge, or hang from the tower’s rungs, earning them 15 points for a scale.

There are opportunities to score additional points by completing certain tasks in FIRST Stronghold. This can be done through breaching and or capturing, and will award the alliance either ranking points in the qualification matches or regular points in the playoff matches.

Any time a robot successfully crosses one of the opponent’s defenses (whether in autonomous or tele-op), that defense’s strength is reduced by 1/2. The second time a robot crosses the defense, that defense’s strength is reduced completely and is considered “damaged”. Once four of the five defenses are damaged, the outer works are considered breached. A breach is awarded 1 ranking point in qualifications and 20 points in playoffs.

As goals are scored in the opposing alliance’s tower, the tower’s strength will be lowered. After 8 goals (high or low), or 10 goals at the World Championships, the tower has no strength and is considered “weakened”. Only a weakened tower can be captured. To capture a tower, all robots in the alliance must either drive onto the opposing team’s batter, or scale the tower. Once the capture has been declared, the tower will turn to the capturing alliance’s color, and their flag will be raised. For capturing, the alliance receives 1 ranking point in qualifications, and 25 points in the playoffs.

Visit Us on Social Media